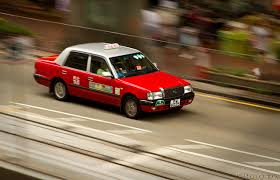 The iconic Hong Kong taxi may be getting a make-over. China car manufacturer BYD announced plans to introduce an electric taxi soon. We’re fortunate in Hong Kong to have a large fleet for clean, efficient and low cost taxis. “Home, please!”

Yesterday, mainland car manufacturer BYD announced that, in May 2013, it would bring 45 electric taxis to Hong Kong. Within three years, the number could rise to 3,000 taxis. BYD also said it would spend HK$40 million to install 47 charging stations at parking lots. The first three of the charging stations have already been completed. BYD said that the electric taxis could be leased or bought. The company did not reveal how much it would cost to lease the vehicles, but it did say that the cars would sell for HK$450,000. Each vehicle would save HK$110,000 in fuel charges. The reaction from taxi drivers has been lukewarm. Drivers have expressed concerns that they might have to wait in line to charge car batteries and would be inconvenienced by having to ship the electric taxis back to the manufacturer for service. Questions have also been raised on who will pay for the electricity.

Yesterday, 27 pan-democrat legislators, along with 12 political parties and trade unions, formerly founded the True Democracy Alliance. The group may join former Chief Secretary for Administration Anson Chan’s Citizens’ Commission on Constitutional Development and Occupy Central to call for a democratic election of the Chief Executive in 2017 and to oppose the establishment of a primary process or screening mechanism. The Convener of the Alliance, Joseph Cheng, said that the threshold for the election of the Chief Executive must not surpass the current level. He also said that the qualifications for nomination must not include a political screening.

Sai Kung sewage treatment plant may be moved into a cavern

The government began the second stage of a public consultation yesterday on a proposal to undertake reclamations at five sites. The government also proposed three cavern sites that it says might house sewage treatment plants or reservoirs. According to the proposal, if a sewage treatment plant in Sai Kung were moved into one of the sites, and a nearby reclamation went ahead, 6.2 hectares of land could be made available for housing. Additionally, since the reclamation project includes the construction of a seawall, a neighboring mooring area for boats can be increased in size. Critics of the plan have suggested that the plan might not be cost-effective due to the effort involved in relocating the plants and in conducting the necessary excavation.