Bird flu is back and it’s a whole new mutation. This strain is H7N9. Today birds appear fine even if they test positive for this new strain. Then the humans fall ill.

China is the centre of the latest outbreak due to the unique nature of poultry production. In America my mother lives in Delaware. It’s a beautiful state when you’re in the historic hamlets, pristine beaches or rolling countryside. The only…challenge…is when you pass a mega chicken production site. There hundreds of thousands of birds are kept in one location.  Trained workers are the only handlers. In China imagine the same large number of birds, but cut their concentration considerably. In China small flocks of chickens are kept in private farms. Sometimes the birds and farmers have living spaces separated by a wall. Sometimes they share the same living space.

“Only in China do you have cohabitation of pigs, humans and water birds,” said Christoph Scholtissek, a retired virologist quoted in The Wall Street Journal

That brings us to the latest outbreak of bird flu. The H7N9 strain prevalent today cannot be visually detected in poultry. Infected birds don’t necessarily look or act sick. People interact closely with the birds – then they too are infected.

As of today the Chinese authorities have confirmed 63 cases of H7N9 bird flu with a resulting 14 deaths. Also in the last day a 4-year-old boy in Beijing was found to be infected even though he wasn’t displaying symptoms. Today another person in Beijing tested positive for bird flu.

But across China people still live close to their birds. Tradition is to raise and slaughter chickens as needed for personal consumption. Changing that will take more than a mutation or two.

Now the spread and infection rate of the H7N9 strain of bird flu has epidemiologists concerned that this latest strain may prove more deadly than the outbreak in 2012. The infection pattern and spread has been faster and further than any previous outbreak.

So if you have chickens in your home, you might want to consider a change (see photo below).  Otherwise stock up on Tamiflu. And stay put. 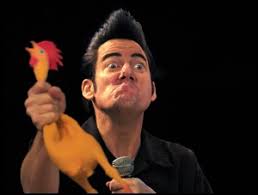