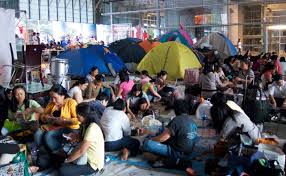 We want democracy, but more than that we want orderliness. A poll put out by Beijing says Hong Kongers do not support the Occupy Central movement. Maybe if it were tidier?

-Pan-democrats want one man, one vote to choose nominating committee, but rivals say this might flout Basic Law

l   With the strike over, sources of tension remain as workers discover that previously offered benefits are included in the salary increase

–Encourages the use of book building instead

l   April CPI rises 2.4 percent in line with expectations, according to NBS