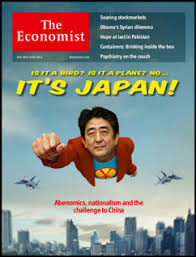 Japan is back. That is the message Prime Minister Shinzo Abe and his government have been promoting since the Spring, backed by the early successes of ‘Abenomics’.
Communicated with greater confidence than Japan has managed for some years, the message has resonated at home and abroad, backed by a reinvigorated economy, Japan’s re-emergence on the agenda in key international financial and political centers, and the momentum gained from Tokyo’s successful 2020 Olympic bid.
But – depending on one’s views on Abenomics’ likelihood of success or indeed whether Japan ever truly lost its standing in the first place – it is also a message that does not tell the full story.
With the Abe administration now a year old, what has been the verdict on progress achieved, and what might we expect to see looking ahead to 2014?

Since Abenomics was first launched, Japan has made clear progress toward pulling out of deflation and stagnation. The yen depreciated rapidly, helping Japanese exporters record a sharp jump in earnings, while the Japanese stock market soared. Just as importantly, there were signs that economic optimism was returning among the general public and business community.
To properly analyze Abenomics, however, the ‘three arrows’ of the strategy should be considered independently. In the case of the first and second arrows, monetary policy (including a massive program of quantitative and qualitative easing) and expansionary fiscal policy, indicators suggest the strategy is having an impact. The inflation rate has reached 0.9 per cent, against the government’s stated target of 2 percent. “We are half way,” Bank of Japan Governor Kuroda has said.
It is the third arrow, the long-term growth strategy comprising structural reform, that has met with the most skepticism. The strategy contains a long list of deregulation measures and other reforms designed to unleash innovation and promote sustainable growth, with the Prime Minister famously promising to be the drill bit to hammer through the bureaucracy’s rock-solid regulations. However, the bureaucrats have fought back, cleverly backtracking on some of the proposed reforms, while other efforts smack of old-style industrial policy with pet projects and budgetary handouts.
Considering the breadth of the growth strategy, it is unsurprising that little progress has been achieved yet. In an interview with Nikkei this week, Abe announced plans to publish a new version of the growth strategy in June 2014, an indication that there is still much work to be done to achieve meaningful reforms and to convince markets of the third arrow’s effectiveness. The plan can be expected to cover employment, agriculture and healthcare, with a continued focus on expanding the role of women in the economy.
Analysis of Abenomics overall to date would suggest ‘so far, so good’, but 2014 will prove if there’s enough substance to make it the other half of the way.

Japan’s commitment to pursuing the Trans Pacific Partnership agreement illustrates Abe’s determination to achieve structural reform, particularly considering the challenges in terms of domestic vested interests and political opposition. Despite eagerness from both Japan and the U.S. to reach an agreement before the end of the year, the latest TPP Ministers’ meeting in Singapore in early December ended without a framework agreement being concluded.
A joint statement from negotiating countries claimed that potential “landing zones” for the majority of key outstanding issues had been identified, although both the U.S. and Japan appear to have fallen back on increasingly entrenched positions during the Singapore round. Further negotiations are due in January, although any agreement now appears unlikely until April at the earliest.
The direction of a Japan-EU trade deal will also increasingly come into focus in 2014. Having first sat down for talks back in April, the two sides reaffirmed their backing for a deal in November with a joint declaration of their intention to swiftly conclude negotiations. Reduction of nontariff barriers has been among the issues to dominate recent rounds of talks, and one tangible sign of progress was seen in October with an agreement to adopt common safety and environmental standards for cars from 2016.

Alongside Abenomics, the issue that has seen Japan most consistently hitting global headlines in 2013 has been the tense security situation in the region, stirred by an increasingly fractious dispute with China over disputed islands. The islands, called Senkaku in Japan and Diaoyu in Chinese, are controlled by Japan but claimed by China. An increasingly assertive China has regularly sent aircraft and ships into the waters and airspace surrounding the islands, and the country’s recent unilateral declaration of an Air Defense Identification Zone covering them is testing the resolve of its neighbors and Washington, and placing additional pressure on the U.S.-Japan alliance.
Tensions between Japan and its neighbors are set to further escalate following Abe’s visit on December 26 to the Yasukuni Shrine, which honors Japan’s war dead including a number of convicted war criminals. The visit came exactly a year since he took office, and marks the first time a sitting prime minister has visited the controversial shrine since 2006. Abe stressed that the visit represented a pledge that Japan must never wage war again. However, the move has angered Beijing and Seoul, which see Yasukuni as a symbol of Japan’s war-time aggression.
Japan’s cabinet this month approved the country’s National Security Strategy, which makes specific reference to China’s “attempts to change the status quo by coercion” and, more broadly, calls for Japan to make a more “proactive contribution to peace”. Coming soon after the controversial Protection of Specially Designated Secrets Act, critics argue further evidence of a shift in focus of the Abe administration towards conservative priorities. Abe’s ability to balance such developments while maintaining a steady hand on the economy over the next twelve months will largely determine the length of his tenure.

The IOC’s decision in September to award Tokyo the 2020 Olympic Games gave a huge boost to national pride, and creates opportunities for companies across a broad range of industries. With planning now beginning in earnest, Tokyo Governor Inose’s abrupt resignation amidst a campaign finance scandal comes at an inopportune time. Tokyo is required to put together an Olympic organizing committee by early February. With the new metropolitan governor not expected to be voted upon until February 9, the national government may step in to take charge of the organizing committee selection, leaving the local government sidelined in the planning process.
Another issue that appears to be converging with the Olympic planning to some degree is Japan’s gaming bill, which would legalize casino gambling. The government is apparently keen to have at least one casino in operation by 2020. Integrated resort gaming, similar to what has been accomplished in Singapore, could prove a sustainable boon for travel and tourism. The initial bill, which is rather controversial and lacks cross-party support, could see action in the Diet between April and June 2014. An implementation bill would then be required, laying out formal guidelines, which could see licenses awarded around 2016 and operations beginning in time for the games.
The most likely site for the first casino is believed to be Odaiba in Tokyo’s bay area, close to the site of the main Olympic venues.

With Japan’s nuclear plants still idled, the increased cost of importing fossil fuels— estimated to have added JPY9.2 trillion to the country’s fuel bill between 2011 and the end of 2013— means that finding a sustainable solution to the energy shortfall is ever more pressing.
Although anti-nuclear sentiment remains strong, Abe is keen to restart Japan’s reactors to avoid the energy situation hampering economic recovery. A government panel this month advised that Japan should embrace nuclear power as an “important and fundamental” energy source. The panel did not, however, offer a recommendation on what proportion of the energy mix should come from nuclear, and the rush to bring more renewables online, particularly solar, through the world’s most generous feed-in-tariffs continues.
Power generation is not the only challenge. Japan’s divided grid also presents an obstacle to increased efficiency, with the country split into 10 regional power authorities, each with their own technical standards. Legislation was recently passed for ambitious reform of the national electricity market, including the creation of a national grid company by 2015, which should enable easier access to transmission and distribution for smaller scale producers and renewables. However, implementation of true competition in generation and retail may take a while, as Japan’s electric utilities remain very powerful and resistance to change is ingrained.